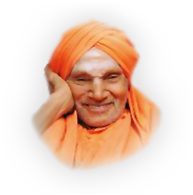 THE GREAT HUMANITARIAN OF THE CENTURY

Karnataka is the land of numerous sacred places and mutts. There are more than three thousand "Guru-Virakta" (Virakta) mutts of Veerashiva Lingayath tradition in the state. Among the ascetic mutts, Sri Siddaganga Mutt attains world -wide popularity as Thrividha Dasoha Mutt (Providing free Food, Shelter and knowledge). The Mutt is like the gate-way to the capital city of Karnataka, Bengaluru. According to the documents, it was established in 16th century, by Thontada Siddalinga Yathivarya. The Mutt has many pontiffs in its tradition of service to mankind. Sree Atavi Swamiji, Sree Uddhana Swamiji & Sree Marularadhya were prominent among them. After Marularadhya the responsibility of the mutt was transferred to His Holiness Sree Sree Shivakumara Swamiji.

Dr. Sree Sree Shivakumara Swamiji, is popularly known as "walking-god" by the common mass, with reverence. He was born in Veerapura, named as Shivanna by the parents, had primary education at Nagavalli, then joined to Government high school at Tumkur with the patronage of Sree Siddaganga Mutt. After the secondary education, Shivanna pursued his BA at Central College Bangalore. But untimely demise of Sree Marularadhya, the designated pontiff to Siddaganga Matt, called back Shivanna to Siddaganga Matt. Sree Uddhana Swamiji, then head of Sree Siddaganga Matt announced shivanna as his successor and re-named him as shivakumara Swamy on 3rd March 1930.

Since the date, His Holiness is striving hard for the development, welfare and up-lift of mankind. The long, so journey of 88 years, based on Kayaka-Shivayoga-offering food (work-worship-Food) the great principle of Sree Basavanna, the renowned social reformer of the 12th Century, is moving on. The mutt serves food, education and shelter to innumerable students. At present there are ten thousand students pursuing their bright future under the patronage of His Holiness Dr.Sree Sree Shivakumara swamiji.

Compassion of Jesus, braveness of Paigamber, calmness of Buddha, non-violence of Mahavera, knowledge of Channabasavanna, Ascetic attitude of Allama and devotion of Basavanna are embedded with the personality of his Holiness Dr.Sree Sree Shivakumara Swamiji. Now His Holliness, a centenarian, has crossed 110 years, in the service of man and devotion to God. His routine work starts at 3.30 dawn and ends at 10.30 night every day. The centenarian is popular among the people as 'Waking God' 'Thrividha Dasohi, 'Abhinava Basavanna' etc., There are number of awards to his credit along with 'Padma Bhushana' of Government of India, 'Karnataka Rathna' of Karnataka Government, 'Basavashree' Basavana award, Mahaveera award and the Doctorate of Karnataka University. On 1st april 2018 the devotees celebrated 111th birthday of Swamiji with lot of affection and devotion.

Welcome to Sree Siddaganga College for Women NAAC Re-accreditation Result: A Grade with CGPA : 3.01
"Education is the debt to be paid by the present generation to the future generation"
-Karnataka Ratna ,His Holiness
Dr. Sree Sree Shivakumaraswamiji